The Herculaneum Papyri are among the most iconic — and inaccessible — items in the “invisible library” of irreparably damaged manuscripts. Buried and carbonized into chunks of charcoal by the eruption of Mount Vesuvius in 79 CE, the approximately 1,100 papyrus rolls offer us a unique window into the classical world. The collection was excavated from the ancient city of Herculaneum in the late 18th century. It was found in a luxurious home believed to belong to the family of Julius Caesar’s father-in-law. Known as the Villa dei Papyri, this site produced the only large-scale library to have survived from Greco-Roman antiquity and the only classical one to have been found in situ. Unfortunately, the contents of this highly unique and valuable library remain largely unknown to this day.

Since the scrolls’ discovery, people have tried various physical efforts to ferret out their contents. The results were largely disastrous. The most successful attempts were made in the 19th century, when about 300 of them were peeled apart by machine. This endeavor resulted in fragmented, layered sheets of brittle papyrus with visible, but largely illegible, writing on the black-as-charcoal surface.

These fragments are uneven and warped, which obscures and distorts the text even further. In addition, it’s practically impossible to tell where one layer of a papyrus wrap ends and another begins. This creates a jumbled mass of letters and words that is difficult to unscramble and understand. Finally, the top layers can hide three, four, or five — no one really knows how many — underlying sheets of writing. Thus, a non-invasive method for extracting the hidden text is needed.

Painstaking efforts to piece together meaning from these open fragments have resulted in limited success.  Papyrologists have identified some texts as important works by Epicurus and his followers, including the poet and philosopher Philodemus of Gadara (see Oxford Bibliographies), and a recent laboriously analyzed papyrus turned out to be a Latin text by Seneca the Elder. In 2008 the Institut de France granted Dr. Seales and his team permission to study a fragment in their collection. The investigation led to the discovery of lead and other trace elements in the ink and represented the first ever instance of reported heavy metals in Herculaneum writings.  The complete results were published in 2009 in the proceedings of the Academy’s annual program Lire Sans Détruire les Papyrus Carbonisés d’Herculanum. Although the quantities were very small, the presence of metal-based ink, a surprising discovery that Dr. Seales was first to report, suggested that imaging methods based on absorption, such as micro-CT scans, could produce contrast at the site of the writing.  As a result of the knowledge gained from the fragment study, the Institut de France granted Dr. Seales permission to scan two intact Herculaneum scrolls on site using a micro-CT machine.

One of the intact scrolls unpeeled by machine in the 19th century is known as PHerc.118 and resides at the Bodleian library at Oxford University. The physical unfurling of the scroll essentially shredded the document into a set of 12 “pezzos” (Italian for “pieces”) that were in turn made up of several smaller fragments. Over the years, various efforts were made to create a visually accessible facsimile of PHerc.118, but the result was an image record as fragmentary as the scroll itself. From 19th-century hand-drawn renderings made by artists when the scroll was first opened (called disegni), to analog film photographs taken in the late 1990s, to digital multispectral images captured in 2005, every venture created yet another version of each pezzo, without any link or reference to prior images. While advances in technology made some of the text clearer with every iteration, each image collection nonetheless posed its own set of problems; and there was no method to view the images as a composite whole so that analysis and understanding of the text could be improved. In addition, these images were still two-dimensional, which prevented scholars from being able to see all of the surface layers, ridges, holes, and contours that, although they represent deformations, can provide clues for navigating the landscape of the text on fragmented, torn papyrus. 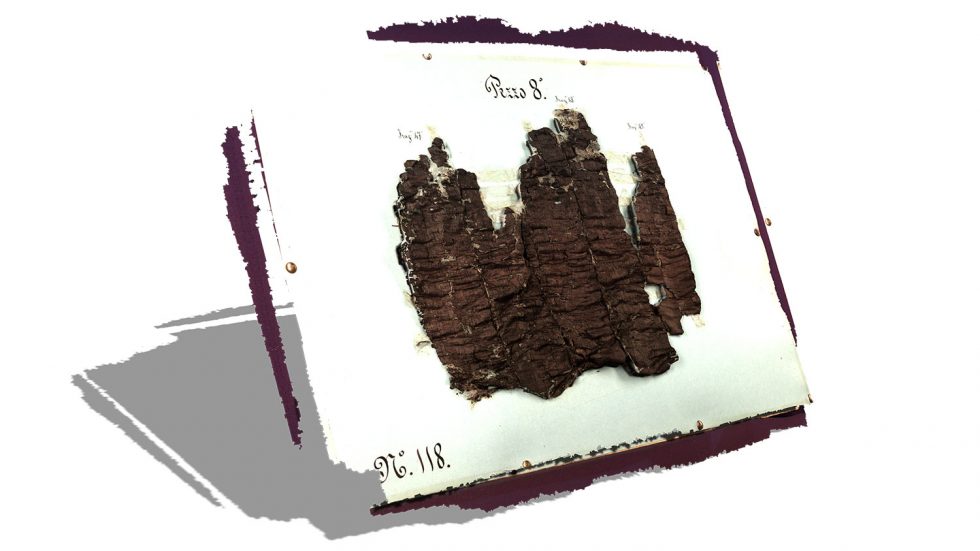 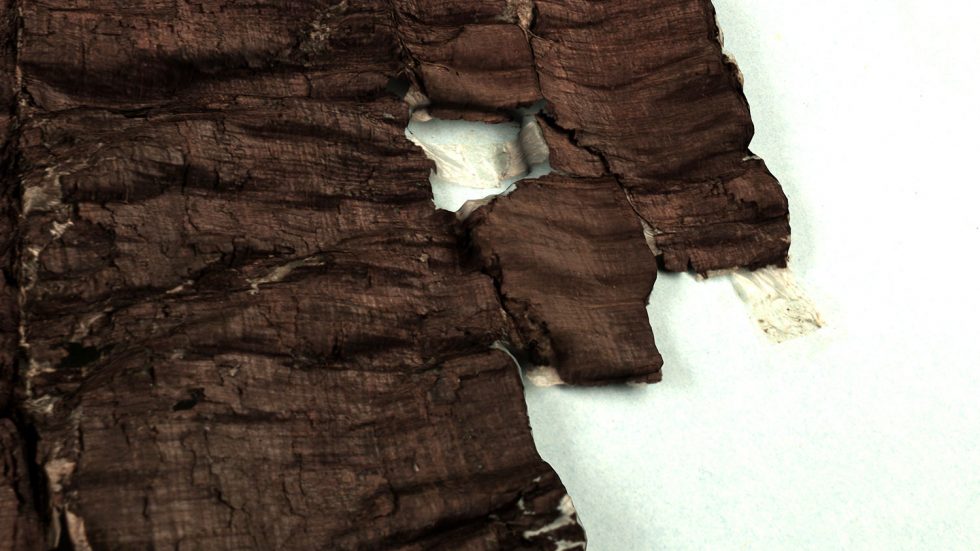 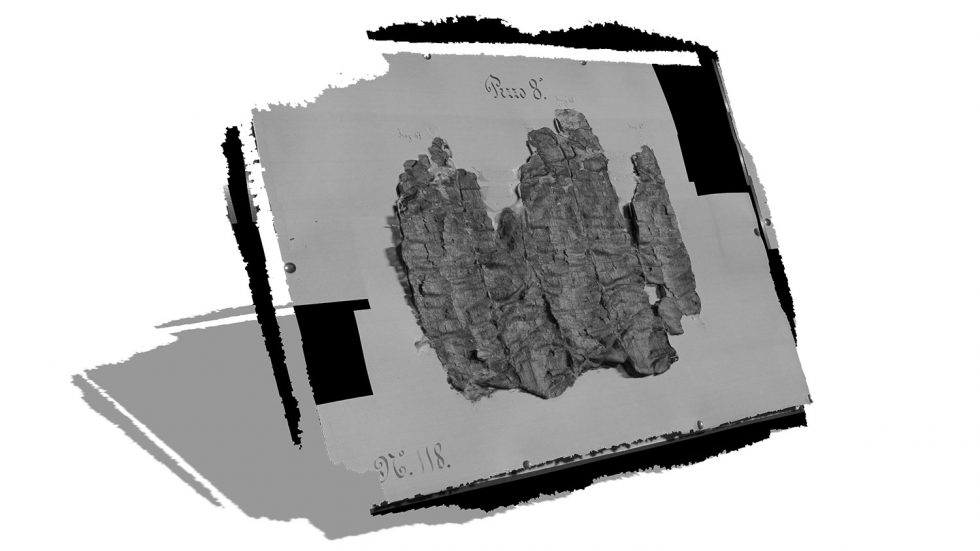 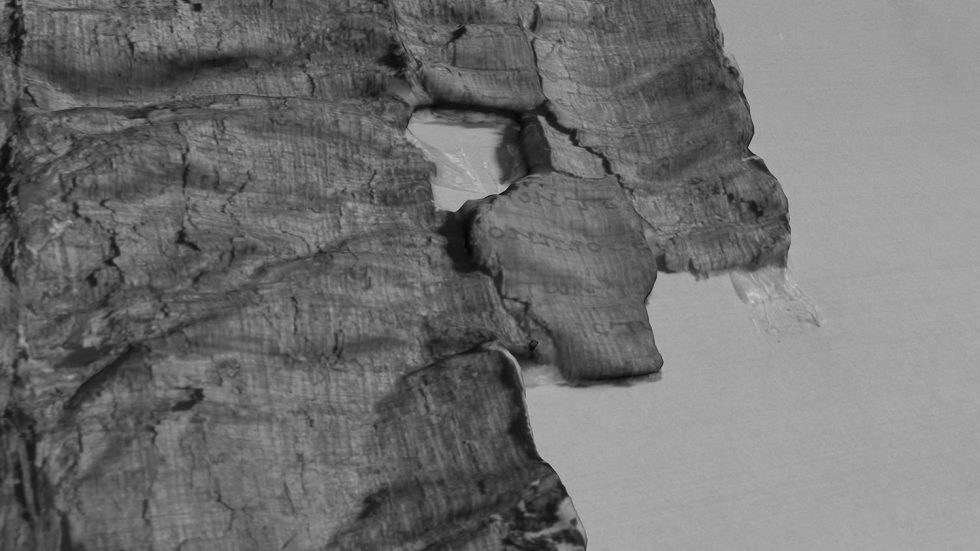 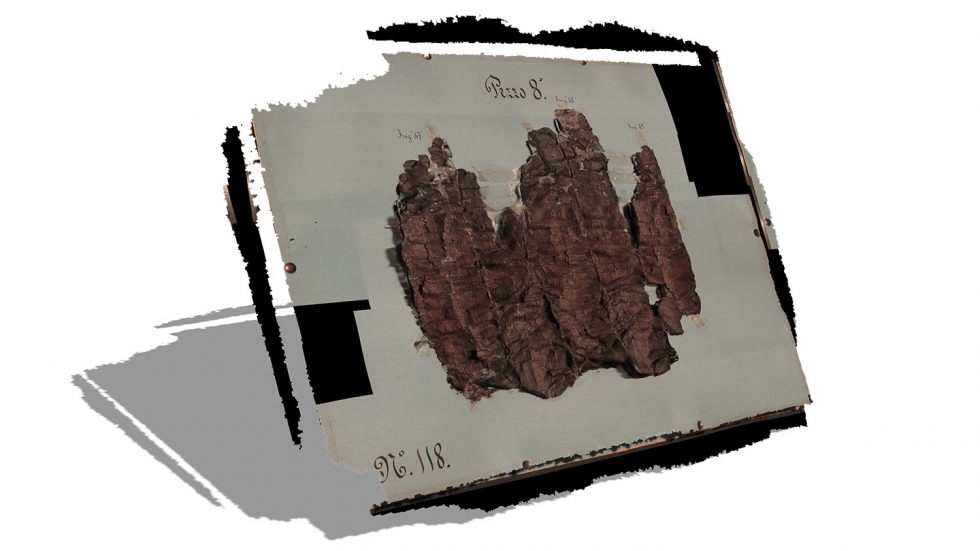 But in the summer of 2017, Dr. Seales and his team created a new digital compilation of PHerc.118. They scanned all 12 pezzos in 3D and created a detailed and accurate digital shape model of each one. New hyperspectral 2D images were also taken showing the barely-visible text under 370 different wavelengths of light (such multi-wavelength imaging can reveal text otherwise not visible to the naked eye). These high-resolution, enhanced 2D images were then aligned, or registered, onto the 3D shape models, revealing the writing on and within the fragments in ways never before seen. By allowing the best textual representations from each facsimile to be viewed at the same time and in 3D, this compilation of all images into one unified data set successfully created a comprehensive, more robust version of PHerc.118 that enhances the readability of the text and enables new scholarly study. Oxford papyrologists have already uncovered new details in our composite 3D version, such as the name Pythocles, a young follower of Epicurus; and they have discerned the 17 character-per-line column structure of the text, which will be crucial to re-assembling the various fragments so the entire scroll can be read.

Read about the technical approach https://www.thinking3d.ac.uk/Seales/

Following the fragment study, Dr. Seales and his team traveled to the Institut de France in 2009 to perform the first-ever micro-CT scans of completely closed Herculaneum scrolls. These micro-CT images revealed much that was previously unknown about Herculaneum papyri and definitively proved it was possible to see, without physically opening the scrolls, every papyrus strand and fiber inside them, even the grains of sand trapped in tiny creases. This study provided the first ever volumetric images of a Herculaneum scroll, revealing the complexity of the internal structure and the utter scale of the task at hand. The scrolls were so tightly wrapped that in many places the scans showed little to no separation between layers, and the team learned much in their attempt to process the images.

First, naive application of existing segmentation techniques does not address the unique problems that Herculaneum scroll strata and that of other ancient manuscripts present. Depending on the type of material being scanned, scroll strata can appear fuzzy or almost indistinguishable due to time-induced distortion, disintegration, or other deformations of the writing medium. Some commonly used writing surfaces like papyrus can fray easily over time, while others like parchment made from animal hide often bubble or suffer holes. Such local defects in the surface make it difficult to visually follow a layer through the volume across the CT slices.  Furthermore, undulations in and fusions of the scroll strata can cause the separations between layers to disappear and reappear at random, and tracking a single stratum through an entire scan becomes even more difficult as layers seem to merge together and then separate later on in the scan. The ink used to pen Herculaneum texts poses another challenge. Ancient writers used a mixture called “carbon black” which, when exposed to micro-CT scans, attenuates the x-rays the same way the carbonized papyrus, an carbon-based material on which it sits, does. Therefore, the ink of Herculaneum texts does not show up as readily in CT-scan data as that found in medieval texts, which usually contains metallic elements that are much denser than the writing surface and attenuate x-rays differently. In addition to these material-specific problems, micro-CT introduces its own anomalies and deformities into scan results, such as beam hardening, streaking, and ring artifacts, that must be compensated for in the final raw CT slices. These extra artifacts can make image processing much more difficult on scroll CT data and are heavily dependent upon the parameters selected at the time of the scan.

This confluence of challenges makes Herculaneum scrolls the most difficult digital restoration case encountered by Seales and his team.  Following the 2009 micro-CT scans, the team spent the next few years prototyping a step-by-step computational approach for processing micro-CT data that would produce a digital representation of unseen text rich enough to enable textual scholarship, a process called “virtual unwrapping.” These advances address most, if not all, of the segmentation challenges presented by Herculaneum materials. Most recently, the team successfully developed and deployed a machine learning algorithm that is powerful enough to reveal the carbon ink that has proven so stubborn to researchers.